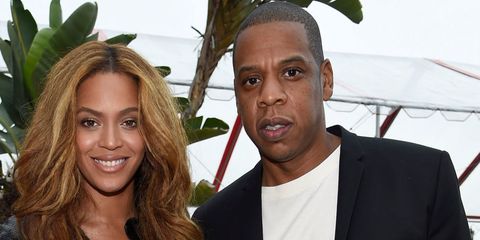 Tidal users may be getting a BIG benefit, in addition to those personal thank you calls from Jay Z. DJ Skee reported yesterday that a joint Jay Z-Beyoncé album will be released exclusively on the streaming service, according to his sources. (But are you really surprised? Jay Z is trying to make Tidal happen. Hard.) While the couple's reps haven't commented, the radio host first teased the joint album in September and said yesterday it's near completion. Let's hope this thing drops soon, because seven months is really too long to wait for another Beyoncé masterpiece.

Jay Z Has Been Personally Calling Tidal Users to Say Thanks

Alyssa Bailey News and Strategy Editor Alyssa Bailey is the news and strategy editor at ELLE.com, where she oversees coverage of celebrities and royals (particularly Meghan Markle and Kate Middleton).
This content is created and maintained by a third party, and imported onto this page to help users provide their email addresses. You may be able to find more information about this and similar content at piano.io
Advertisement - Continue Reading Below
More From Celebrity
Did the Queen's Brooch Send a Message?
Jennifer Lopez and Ben Affleck: Everything We Know
Advertisement - Continue Reading Below
What Happens on Katie's Season?
A Look Back at Gwen Stefani & Blake Shelton's Love
Beyoncé Celebrates Twins Rumi and Sir Turning 4
Katie Nails Casual Cool in Jeans, Tee, and Loafers
Gigi Hadid Wore the Coolest Bright Orange Eye Look
Courteney Cox's Daughter Coco Is Her Double
Sophie Shared a Stealth Selfie on Instagram Story
Meghan and Diana Had Similar Issues with the Queen