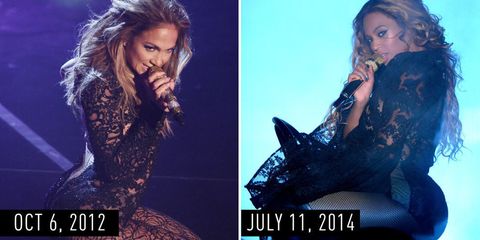 In fashion, as in life, everyone needs someone they can look up to. For some people, that person is Beyoncé. For Beyoncé, that person would appear to be Jennifer Lopez. Just look at all the outfits they have in common!

J.Lo performing at the Meydan Racecourse in Dubai on March 29, 2014.

J.Lo performing during her "Dance Again" world tour in Kuala Lumpur on Dec. 2, 2012.

Beyoncé performing during her "The Mrs. Carter Show" world tour at the Barclays Center in New York City on Dec. 22, 2013.

7. Metallic fringe mini with long sleeves and a low-cut neckline.

J.Lo in the December 2006 issue of Harper's Bazaar.

J.Lo in the December 2006 issue of Harper's Bazaar.

Beyoncé in the January 2007 issue of InStyle.

1
1. Curve-hugging black gown and a beehive.

Beyoncé at the London premiere of Charlie's Angels: Full Throttle on July 1, 2003.

Beyoncé in the April 2003 issue of Complex.

Charles Manning Style Director I'm 30 percent bunnies, 40 percent of the time.
This content is created and maintained by a third party, and imported onto this page to help users provide their email addresses. You may be able to find more information about this and similar content at piano.io
Advertisement - Continue Reading Below
More From Celebrity
Gigi Hadid Apparently Gave Birth on a Farm
Harry & Meghan Want to Go Back to the UK This Year
Advertisement - Continue Reading Below
Adele Shares Previously Unseen Photos on Instagram
Duchess Kate & Prince William Share New Photos
Kit Harington and Rose Leslie Are Expecting
The Queen Is Apparently an Anti-Foodie
Katie Holmes Just Met Her New BF's Parents
Harry Looked Regretful During Time 100 Interview
The Queen's Dining Room Has a Secret Button
Why Demi Lovato Broke Off Her Engagement