On a recent episode of BBC Radio 1's Breakfast Show, Nick Jonas played a game of "Heart Rate Monitor" with host Nick Grimshaw. During the game, Jonas was hooked up to a heart rate monitor and asked about different topics to see what gets his heart pumping. Of course, the one and only Selena Gomez made an appearance, and let's just say Jonas' heart was...pumping. A lot.

About four minutes in Selena appears and says, "Hello it's me, Selena Gomez." The 25-year-old then reminds Jonas about that one time 10 years ago when they went on a double date with Joe Jonas and Taylor Swift in Central Park. (Ah, the memories.) "Heart rate's going up to 90," Grimshaw tells Jonas.

When asked about the date by Grimshaw Jonas nervously responded, "We were trying to keep our relationship private at the time, and she was mad her first experience in Central Park was ruined because I walked about 20 feet away from her." Do yourself a favor and bask in all of Jonas' awkward, nervous, nostalgic glory above. 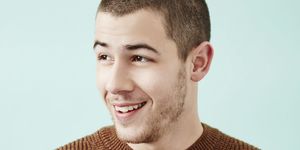