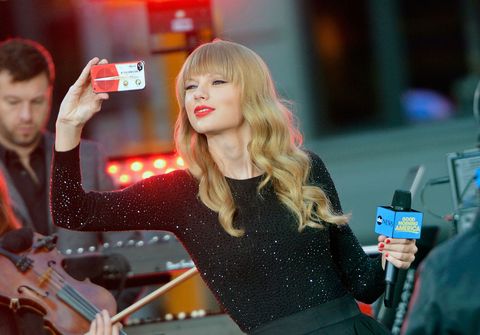 Attention, Kim Kardashian: Hollywood addicts who also love Taylor Swift—the High Priestess of the Squad is getting her own mobile game. Glu Mobile, the developers of Kim's extremely popular app, announced Wednesday that they're working with Taylor on a game set for release in late 2016. No other details about the game are known, but one can only hope that the pets available for adoption are T-Swift's actual cats Meredith and Olivia, and that the challenges involve asking your friends to join you on stage. There should also be a crossover with the Kim Kardashian game so that Taylor can ask Willow Pape and Crystal Fletcher to join the squad. They'll say no, obviously, which is fine because then she can write "Bad Blood 2" about them.

No matter what happens in the game, however, the potential for Taylor to make a ton of money is very high. When Kim Kardashian: Hollywood debuted in 2014, CNN Money estimated that it made $700,000 per day, so you can imagine how much money Swifties would be willing to spend on concert power-ups or whatever else might be available within the app. Just stay away from Ray Powers, Tay. That guy does not mean well.