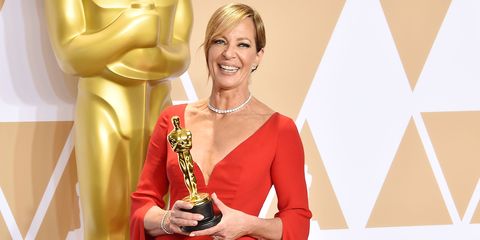 Allison Janney's much-deserved win at last night's Oscars was inspirational—especially the confidence she displayed while accepting the award.

Janney started her speech, for Best Supporting Actress for her role in I, Tonya, by joking, "I did it all by myself."

"I did it all by myself." Let's make this the new "You like me, you really like me" pic.twitter.com/r6Qw9cgC8K

“I did it all by myself” is me presenting my group project in art school when we are graded individually. #oscars

And I am going to start off every public expression of attitude by saying, "I did it all by myself, " a la Allison Janney. https://t.co/T3xLcYLZtI

TFW when @AllisonBJanney starts her #Oscars speech: “I did it all by myself” pic.twitter.com/knHnyQ7EL3

My biggest takeaway from the #Oscars is something I plan to quote at least once a day for the foreseeable future: “I did it all by myself” (courtesy the inimitable @AllisonBJanney).

“I did it all by myself”. Esta es la frase de la noche. #Oscars pic.twitter.com/4Q47cBZcY4

Amy Mackelden Weekend Editor Amy Mackelden is the Weekend Editor at HarpersBAZAAR.com, where she writes about entertainment, celebrity news, beauty, and fashion.
Advertisement - Continue Reading Below
More From The Oscars 2020
Twitter Is Livid Over J.Lo Not Getting Oscar Nom
Wells Adams and Sarah Hyland at the Oscars
Advertisement - Continue Reading Below
Bradley Cooper's Ex-Wife Comments on Gaga Drama
Bradley Cooper & Irina Shayk's Body Language
Did Bradley Cooper Skip the Oscars After-Party?
Ciara Debuts a Gorgeous Bob With Wispy Bangs
Kendall Jenner's Oscars Dress Was Nearly-Naked
Priyanka Chopra and Nick Jonas at the Oscars Party
Angela Bassett, We Are Not Worthy
The Most Awkward Moments from the 2019 Oscars