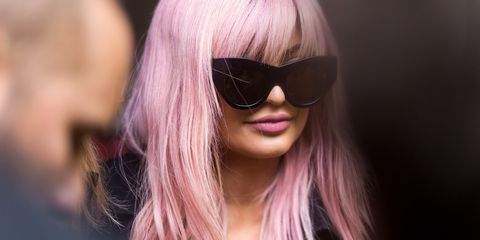 Kylie Jenner is a new mom. She gave birth to her first child, daughter Stormi Webster, back in February and you ~might~ have heard about it. It was kind of a thing.

Stormi is an adorable baby and Kylie is, by all accounts, a smitten and devoted mom. You can see her love for Stormi in her Instagram pictures with her daughter and in the loved-up captions that accompany them.

In addition to being a mom, Kylie Jenner is also still a person who enjoys doing things that babies would not enjoy at all, like attending outdoor music festivals. Kylie, who is a longtime Coachella lover, returned to the festival this year alongside sister Kourtney and boyfriend (and co-parent) Travis Scott.

I’m not a regular mom I’m a cool mom

The self-proclaimed "cool mom" is facing backlash for the decision from critical fans on Twitter, who don't think she should be attending Coachella so soon after giving birth. Sample rants/critiques:

Kylie Jenner should be everyone’s example of learning how to use protection fr. This girl really is gonna leave her baby for three days while she goes to Coachella. When she decided to have the child it’s because she chose to stop being a childish but look at her

kylie jenner had a baby like a month ago and is at Coachella and just got back from Cleveland... i know if i️ just had a baby i️ wouldn’t be leaving her with a nanny all the time. but that’s none of my business ☕️🐸

Y'all thought the birth of her child was gonna stop Kylie Jenner going to Coachella??? THINK AGAIN.

Anyone else find in completely inappropriate that Kylie Jenner went to Coachella so shortly after giving birth?

Others, of course, have taken the stance that it's not really anyone's place to judge Kylie's parenting style or choices and that moms are allowed to do things without their babies. Some even pointed out that making appearances at events like Coachella is, arguably, part of Kylie's job and that lots of moms either have to or choose to continue working after the birth of their children.

Why are people so mad Kylie went to coachella because she has a baby. I’m no kardashian/Jenner minion but give the girl a break

idk what's your problem with kylie jenner going to coachella , do you really think she left the baby without making sure she's got the best care??????? plus that's her version of work lmao getting $ by showing up .

It's also worth noting that Travis Scott, who is also a parent to the same two-month-old baby and also attended Coachella this year, does not appear to be on the receiving end of similar criticism.