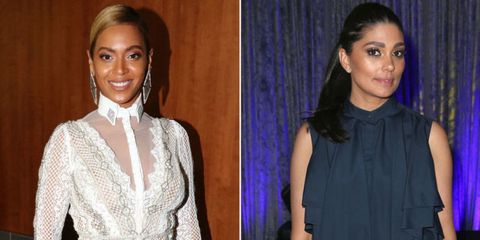 Rachel Roy issued a statement to People on Tuesday following a dramatic weekend involving Beyoncé, Lemonade, "Becky with the good hair," and the Beyhive, who probably broke a record for using the most lemon and bee emojis in 48 hours. Rachel is speaking out for the first time after tweeting on Sunday that she respects "love, marriages, families, and strength" in response to the Beyhive singling her out to be the woman Jay Z cheated on Beyoncé with and the one who caused Solange's epic elevator brawl. Rachel tells People that she wants to "put the speculation and rumors to rest" and that her Instagram post, which included a caption containing the words "good hair," was meant to be "fun and lighthearted."

Referring to Beyoncé's song, "Sorry," Rachel says, "There is no validity to the idea that the song references me personally. There is no truth to the rumors."

Consequently, online haters have targeted me and my daughters in a hurtful and scary manner, including physical threats. As a mother—and I know many mothers would agree—I feel that bullying in any form is harmful and unacceptable. I would hope that the media sees the real issue here—the issue of cyber bullying—and how it should not be tolerated by anyone.

Rachel pulled out of a seminar in New York City on Monday following the Lemonade episode, citing a "personal emergency."

This content is created and maintained by a third party, and imported onto this page to help users provide their email addresses. You may be able to find more information about this and similar content at piano.io
Advertisement - Continue Reading Below
More From Celebrity
Princess Eugenie's Son Got to Meet Prince Philip
Ashley Graham Is Having Twin Boys
Advertisement - Continue Reading Below
Gabrielle Union Danced Topless at a Window
Ben Affleck Is "in Awe" of Jennifer Lopez
Princess Beatrice Has Given Birth to a Baby Girl
Gigi Hadid's Mom Shared Sweet Pics of Khai
Kate & Will Probably Won't Have a Fourth Child
Ben & Jen Plan to Spend the Holidays Together
Kate & Will Are "Anxious" About Harry & Meghan
Mandy Moore Calls Breast Pump Emmy's MVP Accessory