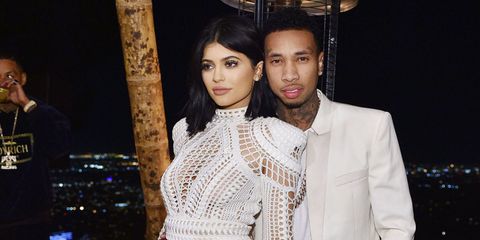 WHAT IS GOING ON WITH KYLIE JENNER'S RELATIONSHIP? The big, important question everyone is asking themselves today. First, she appeared in a new music video for PARTYNEXTDOOR, then Tyga uploaded a picture of her to Instagram (which he swiftly deleted) and now the former couple seem to be making things public again.

Kylie and Tyga arrived at the premiere of her brother-in-law Kanye West's new music video, Famous together, and then left in the same car following the screening. After a week of speculation about their reconciliation, we can't help but think that this is a hint to the public about where they stand now.

"They are not back together officially but started seeing each other again romantically.It's not as much pressure this time around because they both have had some space over the past few weeks apart. Tyga wants to get back with Kylie though."

BUT THAT'S NOT ALL. Earlier in the week, Kylie had uploaded a picture of herself to Instagram (on the same bed that she was sat on in Tyga's now-deleted post, FYI) and some eagle-eyed fans noticed that she tagged her 'ex' in the picture. AND THERE'S STILL MORE. The tag was placed on her bootay. Ooooh, interesting.

Tagging your bum for someone on Instagram. Now, if that isn't love in the 21st century, we don't know what is.