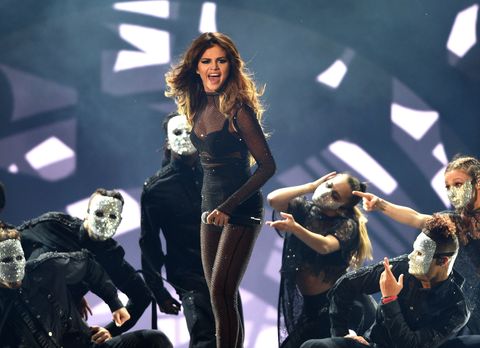 Selena Gomez, Rihanna, and Kendrick Lamar will headline this year's Global Citizen Festival along with Major Lazer and Metallica. Chris Martin and Ellie Goulding will also perform; Chelsea Handler and Priyanka are among the hosts.

The event, which will take place September 24 in New York City's Central Park, launched in 2012 and is part of Global Citizen's effort to end worldwide poverty by 2030. Chime for Change, a campaign founded by Gucci, Beyoncé, and Salma Hayek Pinault, is partnering with Global Citizen again this year to raise awareness specifically for girls and women. (Beyoncé graced the Great Lawn with her presence last year.)

"I am honored to return as co-host of the Global Citizen Festival," said Salma Hayek Pinault. "As co-founder of Chime for Change, I've been deeply inspired by the girls and women I have met around the world who are determined to get an education and build a better future. They are truly the agents of change who can help to bring an end to extreme poverty."

Tickets to the festival are free, with admission selectively granted to those who participate in campaign efforts listed on GlobalCitizenFestival.com. What are you waiting for?