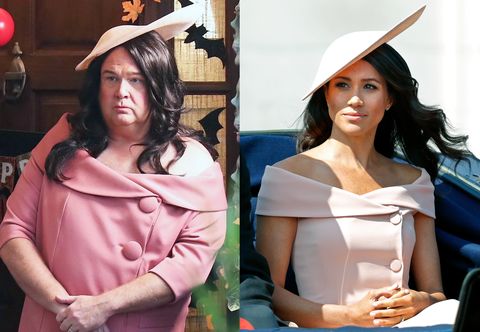 As Halloween draws near, it's time to start prepping your costume so you're not left going as a cat for the fifth year in a row. If you're running low on costume inspiration, let Modern Family's Eric Stonestreet be your guide to the best Halloween costume this year.

For the Modern Family Halloween episode, Stonestreet's character, Cameron Tucker, dressed as Meghan Markle in a blush off-the-shoulder skirt suit and matching hat. Stonestreet also wore a long brunette wig that was styled just like Markle's during the Trouping the Colour parade in June. TBH, this is the best royal transformation and I need to know where he got that costume.

While Stonestreet was dressed as Markle, Stonestreet's on-screen husband, Mitchell Pritchett (A.K.A. Jesse Tyler Ferguson, IRL) went as Prince Harry in his military uniform. Sadly, the majority of the family's costumes remain a mystery, but we also know that Phil Dunphy, played by Ty Burrell, will be a literal fly.

While this episode looks like it'll be so much fun to watch, it's so hard to forget that the Modern Family creator, Christopher Lloyd, said a major character will pass away this season. "We do deal with death, which is certainly a topic that families have to deal with, and on television, it's not easy to do because that's a heavy subject," he said. "But at the same time, it would seem unusual for a family not to go through it."

Please don't do this to us, Lloyd!

Shannon Barbour News Writer Shannon is a news writer at Cosmopolitan.com, and when she's not obsessing about Cardi B, she's thinking about Justin Bieber and still trying to memorize Beyoncé's Beychella choreography.
This content is created and maintained by a third party, and imported onto this page to help users provide their email addresses. You may be able to find more information about this and similar content at piano.io
Advertisement - Continue Reading Below
More From Halloween Ideas We Love for 2020
Our Favorite Celebrity Halloween Costumes In 2020
A Classic Horror Bucket List for Scary Movie Buffs
Advertisement - Continue Reading Below
Scary-Glam Halloween Makeup Ideas to Bookmark
Group Halloween Costume Ideas for the Office
Halloween Costumes You Can Wear for Work Zooms
Celebs Who Dressed as Other Celebs for Halloween
The Best Duos to Channel This Halloween
Look Back on Heidi Klum's Epic Halloween Costumes
The Best Celebrity Couple Halloween Costumes
The Popular Horror Movie the Year You Were Born