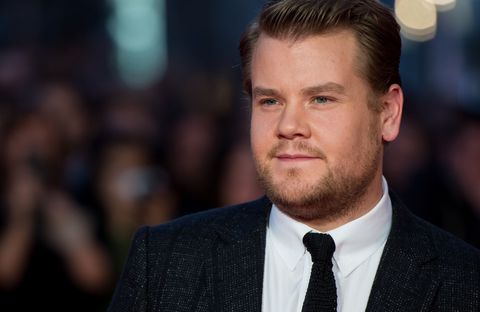 James Corden has been taking a break from filming the The Late Late Show, but that hasn't stopped the TV star from making his views on President Trump's ban on immigration from seven Muslim countries clear.

Although his talk show has been pre-recorded this week, Corden shared his response to the travel ban by filming a video which will be broadcast before Tuesday night's episode.

Titled "Post-Ban Trip Through LAX," the short clip follows Corden, who moved from Britain to the U.S. in 2014, through LAX airport in Los Angeles. His journey sees him check-in, eat a sandwich, and pass through security without interruption, which demonstrates how easy it is for the London-born TV host to leave the U.S. This message is highlighted at the end of the video.

"Today, James flew out of Los Angeles," it reads. "So all our shows this week have been pre-taped. Freedom of movement should be this easy for all legal immigrants. Not just the white and Christian ones."

Corden's powerful political statement comes after he showed his support for the people of Liverpool by tweeting a picture of the anti-Trump protests.

Proud of the people of Liverpool for this. X pic.twitter.com/RRJeRNZ8iC

Of course, Corden isn't the only star to call out Trump for his decision. After the president signed an executive order that halts refugees from entering the US last Friday, a number of high-profile names have spoken out against the controversial ban.

Actress Kerry Washington said news of the ban made her "sick to her stomach," while filmmaker Michael Moore apologized on behalf of America.

Sick to my stomach today about the #MuslimBan
Don't understand why? Go to @Stl_Manifest & learn the awful history of US rejecting refugees

To our Muslim neighbors in the world: I & tens of millions of others are so very sorry. The majority of Americans did not vote 4 this man.