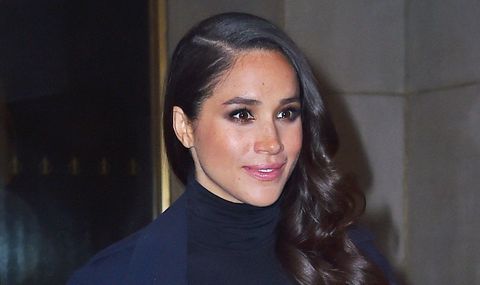 Just in case there were any doubts about who she is dating, Meghan Markle has been pictured in public wearing a ring with Prince Harry's first initial on it.

Following her dinner date with the prince at Soho House in London last Friday, the Suits actress has been photographed near Harry's cottage in the grounds of Kensington Palace.

As she shopped for flowers in jeans, Hunter boots and a Barbour, the 'H' ring could just be seen amongst a stack of similar gold rings worn on Meghan's right hand.

Meghan Markle makes a declaration of love for Prince Harry wearing a ring with his initial https://t.co/1usTKEj4DG pic.twitter.com/ZykR01wvAe

It was a subtle statement, but it's not the first time the star has acknowledged her boyfriend through her jewelry.

While Harry was away on a 15-day tour of the Caribbean in December, Meghan stepped out in a Maya Brenner necklace strung with an "M" and an "H." The couple were also spotted wearing matching beaded bracelets when reports of the relationship first emerged last year.

We could be seeing a lot more of Meghan hanging out in the capital, too. According to sources, she wants to spend as much time as she can in London before her filming commitments begin again in March.

"She is beautiful, accomplished, whip-smart, and has all the humanitarian credentials that Harry so admires," a source told The Mail.

"And although Meghan has her roots in the US and Canada, she is a keen traveller with a lot of friends in London, so moving over wouldn't be too seismic.

"The only issue would be getting [her dogs] Guy and Bogart settled permanently in the UK as the three of them come as a package."

It looks like Guy and Bogart are already prepared for a move...