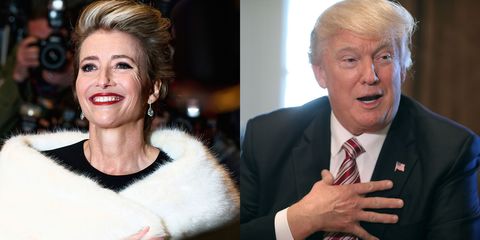 You'd be hard-pushed to argue against Emma Thompson's national-treasure status—especially after you hear this news. The actress has revealed she once had to reject advances from the one and only Donald Trump.

Appearing on a Scandinavian chat show recently, Thompson claimed she received a phone call from the now-President back in the '90s.

After introducing himself on the phone, the Love Actually star said it was "like a moose had just entered [her] trailer," according to The Hollywood Reporter.

Apparently, Trump had called the actress to offer "some accommodation" in Trump Towers, reassuring her that her stay would be "really comfortable."

He reportedly went on to add: "I think we would get on very well. Maybe we could have dinner sometime."

Needless to say, she was like, "Nah, bruh," which thus concludes another installment of Donald Trump Creepily Pursues Female Celebrities.

This content is created and maintained by a third party, and imported onto this page to help users provide their email addresses. You may be able to find more information about this and similar content at piano.io
Advertisement - Continue Reading Below
More From Celebrity
Your First Look at Harry & Meghan's Oprah Special
Best Celebrity Instas from the 2021 Golden Globes
Advertisement - Continue Reading Below
J.Lo Looks Impossibly Stunning In a White Swimsuit
What Margot Robbie Wore to the Globes
Katie Stuns in a Leather Jacket and Baggy Jeans
J.Lo Reunites with A-Rod for Some Instagram PDA
Shop Meghan's Stunning $30 Summer Dress
Duchess Kate Wears a Sleek Green Blazer
Meghan & Harry Update Archewell Website
Will Is in the Dark About Sussex/Oprah Interview