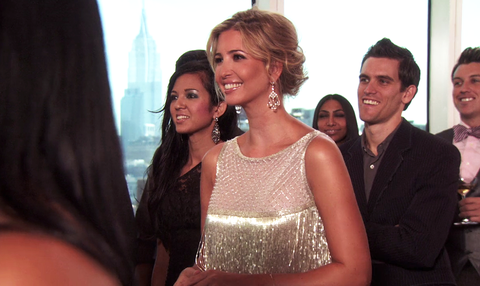 Guys. GUYS. Ivanka Trump and Jared Kushner guest-starred on Gossip Girl back in the day. This is one of those newly discovered pop culture nuggets that simultaneously makes you go "Wait WTF?" and "Yeah, of course."

"Thank you, Jared, and thank you, Ivanka, for marrying Jared and giving someone else the chance to win Bachelor this year," says Colin, who has just won Bachelor of the Year in Jared's place. Ivanka beams, Jared shakes Colin's hand, and Serena pines for Colin over in a corner.

As it turns out, this episode aired on Ivanka and Jared's one-year wedding anniversary in 2010, a tidbit shared by Ivanka herself during an InStyle interview at the time. "We had so much fun filming together but I am not sure if you could characterize our cameo as acting, per se," she said. "I never miss an episode of Gossip Girl. I think I'm a cross between Blair Waldorf and Lily van der Woodsen when it comes to the style. I like the uptown city style and a clean-cut, streamlined silhouette."

Jared and Ivanka were on Gossip Girl in 2010 and I need everyone on the earth to know it pic.twitter.com/iHmY3F8wSl

But for real: has there ever been an actual person more like a GG character than Ivanka Trump? An Upper East Side It Girl from a powerful old-money family who appears regularly in the tabloids and whose moral code might charitably be described as "flexible?" Serena Van Der Woodsen's father was even played by a Baldwin just like Ivanka's! This is all too real.

Emma Dibdin Emma Dibdin is a freelance writer based in Los Angeles who writes about culture, mental health, and true crime.
This content is created and maintained by a third party, and imported onto this page to help users provide their email addresses. You may be able to find more information about this and similar content at piano.io
Advertisement - Continue Reading Below
More From Celebrity
Prince William Mentioned Harry By Name, Finally
Republicans Want Meghan Markle Stripped of Title
Advertisement - Continue Reading Below
Princess Diana Would Be "Horrified" By Portrayals
The Cambridges Head Out on Vacation
Spice Girls Reunion Tour Might Feature Posh Spice
Prince Charles' Revealing Joke About the Throne
Some People Think Prince Harry Sounds American Now
Prince Charles May Make Buckingham Palace a Museum
Chrissy's Daughter Luna Is Learning to Read
The Queen Spent a Night in Hospital