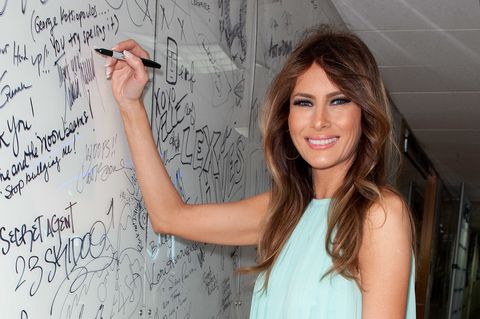 A few weeks ago, Pamela Anderson tweeted a thank-you letter from Melania Trump for a faux-fur coat the actress had gifted her.

@flotus
Dear Melania,
Thank you for your sweet note.
It is heartwarming to see you
manage your position with such beauty and grace.
Pamela pic.twitter.com/h9mmdqxp0h

Though kind of weird, this newfound friendship between two apparent animal lovers seemed like an all-celebrities-know-one-another-type thing. But not everyone wrote it off so quickly—in fact, some with eagle eyes noted the similarity between Melania and her husband's handwriting.

For reference, here are close-ups of both their signatures.

Furthering the investigation, Yahoo spoke to handwriting expert Sheila Kurtz, who was, quite frankly, amazed.

She has been reportedly studied Donald's handwriting for years, and this was her response to seeing Melania's own signature: "Hers looks just like his, which is absolutely amazing."

But maybe it's normal for people who've been together for 19 years, 12 of them married, to pick up some similarities? Apparently not, said Kurtz, who explained that this was probably coordinated.

"This is stylized. Maybe they brought someone in to show her how to do it or [it's] a stamp, but it is definitely stylized."

Enjoyed spending time with Congressional spouses at today's annual luncheon. I look forward to working with such an impressive group.

However, Kurtz still had much to say about the FLOTUS' handwriting, suggesting she is mysterious as well as intelligent.

"When someone writes, and you can't really read what they're writing, they don't want you to read them at all," she explained. "The first [letter], where it goes up into a point, that's pretty sharp and direct and gets right to it. The downstrokes—those two lines in her last name—those are very sharp...[Melania is] a sharp thinker, a fast thinker, and picks up information quickly."