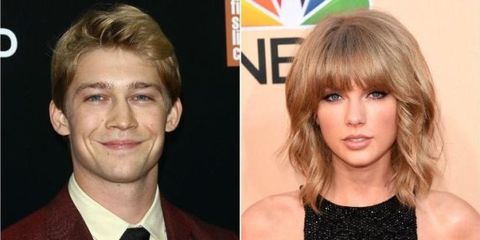 For a woman whose relationship history with the likes of Jake Gyllenhaal, Harry Styles, Calvin Harris, John Mayer, and Tom Hiddleston has frequently made front-page news, it comes as a surprise the singer has managed to keep her latest relationship a secret from the public and the media for so many months.

According to the Sun and Daily Mail, she is reportedly dating budding London-based actor Joe Alwyn, who is best known for his leading role in Ang Lee's 2016 film Billy Lynn's Long Halftime Walk, starring opposite Kristen Stewart, Vin Diesel, and Steve Martin.

The papers also report that the Grammy Award winner has been living incognito for several months, renting a house in North London suburb Crouch End, where Alwyn lives with his psycho-therapist mother and documentary-maker father.

According to the Sun, a friend of Alwyn—who was described by the Hollywood Reporter earlier this year as the "Next Big Thing"—revealed:

This isn't a new couple alert or a secret relationship–the only people this has been a secret to is the media because all of us, Taylor and Joe's closest friends and their families, were aware they have been together for several months and have known each other for a long time.

After her 1989 tour and all the attention Taylor received, she learned she had to be more protective of her personal life and she and Joe decided early on to keep their private life private.

Despite keeping a relatively low profile in recent months in public and on social media, having only posted two photos celebrating her friends' (Lorde and Haim) latest music on Instagram and her last show being the 2017 Super Saturday Night Concert, it isn't that much of a stretch to believe Swift has recently been living in Blighty, unbeknown to the rest of us.

After all, in November you'll remember we reported that Swift superfan Lainey Lui (of celebrity news website Lainey Gossip) revealed the "I Knew You Were Trouble' singer chartered her private plane to London Stansted Airport.

At the time, many fans suggested Swift's visit to London could hint at a reconciliation with her former British beau Tom Hiddleston, but we now think it might have been a secret trip to visit her latest love.

Don't believe their relationship could date back that far?

Well, the same month, Swift was spotted attending a preview screening of Alwyn's 2016 film along with her mother Andrea, as well as singers Este and Alana Haim at the ArcLight cinema in Hollywood, which suggests Swift's interest in her former University of Bristol student boyfriend dates back to the end of 2016.

However, it appears Swift isn't the only one who has wanted to keep the pair's relationship under wraps.

In an interview with the Evening Standard earlier this year with Joe, the publication revealed "he won't be telling us his relationship status."

Could his romance with one of the most high-profile singers in the world have been the reason?

In 2015, Taylor opened up about her difficulty in finding men willing to embark on a relationship with her, given her high-profile career.

She told the Telegraph: "No one's going to sign up for this and everything that goes with it. Like, 'Hi, nice to meet you, want a date? Do you love camera flashes? I hope you do!'"

Is it any surprise, then, that Joe and Taylor wanted to keep their love behind closed doors for as long as possible, away from the prying eye of the media?

With Swift now back in the U.S. preparing for her upcoming sexual assault trial against radio DJ David Mueller, and Alwyn gearing up to star alongside Emma Stone and fellow British actors Rachel Weisz and Nicholas Hoult in the upcoming film The Favorite, we have a feeling the demands of a long-distance relationship and the pair's commitment to their careers might, sadly, signal their relationship has already come to an end.

However, we're impressed they've managed to keep us in the dark for so long.