Selena Gomez broke down in tears while telling the story of the Saldivar family, who drowned in the floods of Hurricane Harvey. Gomez appeared in a taped segment of the Hand in Hand: A Benefit for Hurricane Relief on Tuesday night to raise money for those affected by Hurricane Harvey in Texas and Hurricane Irma, which has caused severe damage to Florida and the Caribbean.

Gomez told the devastating story of a man named Sammy Saldivar, whose family was killed during Harvey. The Saldivars lived near Grand Prairie, Texas, where Gomez grew up.

August 27th, seven members of the Saldivar family try to escape the rising floodwaters. Their van is swept into the bayou. Only Sammy Saldivar manages to survive. I come from Grand Prairie, about 250 miles away from the Saldivar's home. Their story affected all who heard it. And no matter who we are, the differences we have suddenly did not seem to matter. Since that day we have joined together—neighbor helping neighbor, without stopping to think about race, religion or anything else. Ricardo Saldivar has spoken out about his brother's escape and what happened to his beloved family. He said, "I know they went to heaven holding hands." And if we are going to get through all the storms that confront us, that's how we are going to do it—together, hand in hand.

The Washinton Post reported on the Saldivar family after the storm. Sammy, the paper reported, watched helplessly as his elderly parents and four great-grandnieces and grandnephews drowned after their van was swept into the rising bayou. 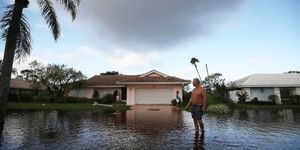 "He was yelling at the kids to climb out of the back of the van; I'm sure they couldn't reach it," Sammy's brother Ricardo told The Post. "He could hear the kids screaming but couldn't push the doors open. That's what he keeps hearing in his head. And the van just went underwater and was gone."

Kate Storey Esquire Writer-at-Large Kate Storey is a Writer-at-Large for Esquire covering culture, politics, and style.
This content is created and maintained by a third party, and imported onto this page to help users provide their email addresses. You may be able to find more information about this and similar content at piano.io
Advertisement - Continue Reading Below
More From Celebrity
Britney Spears Dedicated a Message to Her Sons
Meghan's Face "Lights Up" When Harry Walks In
Advertisement - Continue Reading Below
Kate Middleton, Millennial, Wore Skinny Jeans
'Sex and the City' Star Willie Garson Dies Age 57
Princess Eugenie's Son Got to Meet Prince Philip
Ashley Graham Is Having Twin Boys
Gabrielle Union Danced Topless at a Window
Ben Affleck Is "in Awe" of Jennifer Lopez
Princess Beatrice Has Given Birth to a Baby Girl
Gigi Hadid's Mom Shared Sweet Pics of Khai