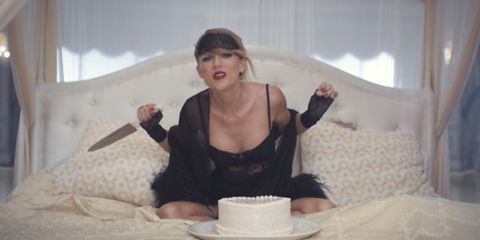 Taylor Swift has released the video for "Blank Space" — and she goes insane in it. It's great.

The story starts out nicely enough, with an adorable cameo by Olivia Benson:

T-Swift meets a hot guy. He walks her around her lavish estate in a cape:

They ride horses together:

She paints his portrait, as ones does when one lives alone in a mansion:

She carves his name ("Sean") into a tree:

Then things take a dark turn: T-Swift sees Sean texting while they're on a picnic. Maybe he was supposed to be spreading some peanut butter on an apple for her and she's hangry; maybe he was texting another woman. Whatever the case, it sends T-Swift over the edge.

She defaces his portrait:

Takes an ax to the tree.

Cuts holes in his shirts:

Sets them on fire:

And smashes his car with a golf club:

At one point, she even stands on a horse:

blank space from grtsctts on tumblr on Vimeo.

Patti Greco Writer Patti Greco is a freelance writer and editor based in Brooklyn.
This content is created and maintained by a third party, and imported onto this page to help users provide their email addresses. You may be able to find more information about this and similar content at piano.io
Advertisement - Continue Reading Below
More From Music
Princess Diana's Butler Talks 'The Crown'
Reese & Ryan's Son, Deacon, Drops His First Single
Advertisement - Continue Reading Below
Life Advice From an Icon, Cher
J.Lo Is Basically Naked on Her New Single Cover
Karaoke Songs Anyone (Yes, Anyone) Can Rock
Um, This Dude Claims Lady Gaga Stole “Shallow”
Sad Taylor Swift Is the Best Taylor Swift
Jennifer Lopez's NYC Concert Was Evacuated
Miley Cyrus Channels Britney Spears' Iconic Look
Ginger Spice Apologizes for Leaving Spice Girls