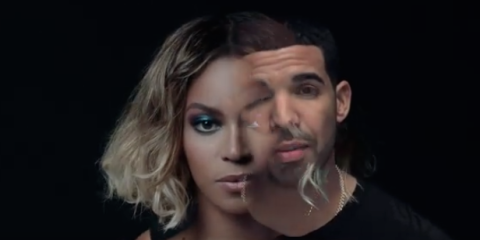 The 6 God has blessed us yet again.

Because releasing a surprise mixtape with Future (not to mention its hit lead single, "Hotline Bling," which has quickly entered Billboard's top 10) wasn't enough, the ever-generous Drake just dropped a new track with Beyoncé called "Can I"—and it is *everything.*

After the song leaked in its demo format earlier this summer, a more polished version debuted on yesterday's episode of OVO Sound Radio on Beats 1. Over sparse claps and sick beats, Drizzy raps to Queen Bey, who repeatedly asks, "Can I...baby?"

We don't want to speak for Drake, but we're going to go ahead and assume that the answer to your question Beyoncé is yes, you most definitely can. And so can we. (Play this song over and over again, that is.)

Take a listen to "Can I" below:

This content is imported from Third party. You may be able to find the same content in another format, or you may be able to find more information, at their web site.
The first D+B duet, "Mine," appeared on Bey's 2013 album. Their latest effort is likely to be featured on Drake's upcoming LP Views From the 6.
This content is created and maintained by a third party, and imported onto this page to help users provide their email addresses. You may be able to find more information about this and similar content at piano.io
Advertisement - Continue Reading Below
More From Music
Princess Diana's Butler Talks 'The Crown'
Reese & Ryan's Son, Deacon, Drops His First Single
Advertisement - Continue Reading Below
Life Advice From an Icon, Cher
J.Lo Is Basically Naked on Her New Single Cover
Karaoke Songs Anyone (Yes, Anyone) Can Rock
Um, This Dude Claims Lady Gaga Stole “Shallow”
Sad Taylor Swift Is the Best Taylor Swift
Jennifer Lopez's NYC Concert Was Evacuated
Miley Cyrus Channels Britney Spears' Iconic Look
Ginger Spice Apologizes for Leaving Spice Girls