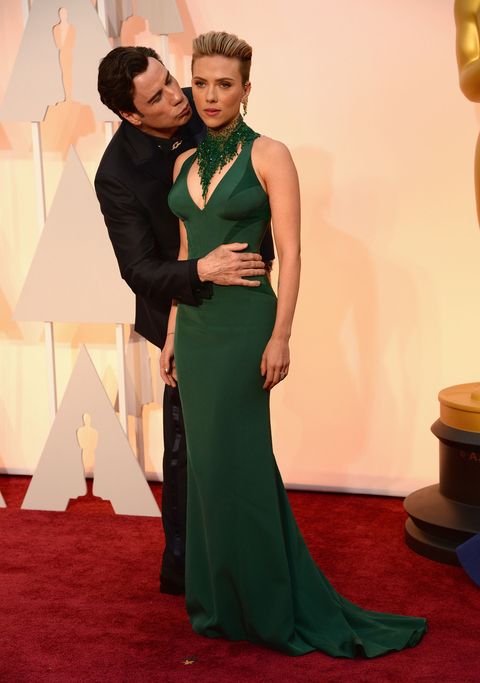 Maybe some mysterious substance seeped into the Veuve supply or maybe it's just the end of a very long awards season, but either way, the celebrities let loose on tonight's Oscars red carpet, revealing some, uh, unusual relationships. Here, a look at some of the weirdest/funniest/cutest/most uncomfortable-making moments from earlier tonight.

Or they were just in the wrong place at the wrong time.

Admittedly it was raining, but Jared Leto was the only star to pose with his rain gear. (Can't get those ombré waves wet.) And, of course, it looked damn good.

3. John Travolta and Scarlett Johansson's...Whatever That Was

Do you think he was like, "Let me embrace youuuu, Stewart Johnzon?"

The Cutest Couples at the 2015 Academy Awards

Chelsea Peng I'm Chelsea Peng, the assistant editor at MarieClaire.com.
Advertisement - Continue Reading Below
More From The Oscars 2020
Twitter Is Livid Over J.Lo Not Getting Oscar Nom
Wells Adams and Sarah Hyland at the Oscars
Advertisement - Continue Reading Below
Bradley Cooper's Ex-Wife Comments on Gaga Drama
Bradley Cooper & Irina Shayk's Body Language
Did Bradley Cooper Skip the Oscars After-Party?
Ciara Debuts a Gorgeous Bob With Wispy Bangs
Kendall Jenner's Oscars Dress Was Nearly-Naked
Priyanka Chopra and Nick Jonas at the Oscars Party
Angela Bassett, We Are Not Worthy
The Most Awkward Moments from the 2019 Oscars