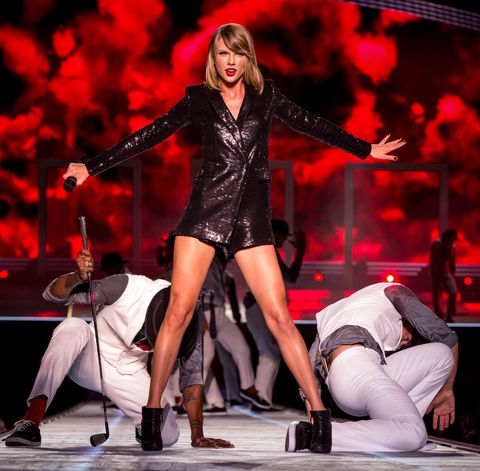 Following the tidal wave of star power that was Taylor Swift's "Bad Blood," music video, we've been eagerly anticipating her next move or rather, her latest single, off of 1989.

As of this past weekend, rumor has it that the song "New Romantics," one of the three bonus tracks off of the deluxe version of the album, will be it. But while we're dying for this sparkling ballad to have its moment, Swift is trying to throw us off her scent, as she does.

"Why? Where? Who? How?," Swift wrote on her Tumblr page. "I don't even know what the next single is yet!! Let's all take deep breaths in and out and watch Bad Blood again on Vevo. Because that is the only single I know of currently."

We know what you're doing here Tay, but considering that the song came in as number two on Rolling Stone's Top 25 Songs of 2014, it's only a matter of time until it's unleashed on the air waves so that those few-and-far-between individuals who haven't memorized 1989 in its entirety can, too, become obsessed.

Oh, and the video? Even if doesn't boast an insane roster of cameos, it'll still be wondrous—that's just how T-Swift rolls.

View On Instagram
Lauren Valenti Associate Web Editor I’m the associate web editor at Marie Claire.
This content is created and maintained by a third party, and imported onto this page to help users provide their email addresses. You may be able to find more information about this and similar content at piano.io
Advertisement - Continue Reading Below
More From Celebrity
Jennifer Aniston Answered Bizarre Fan Questions
Prince Charles "Really Wants to Meet" Lilibet
Advertisement - Continue Reading Below
Britney Spears Deleted Her Instagram Account
Megan Fox Won't Be Told "What a Woman Should Be"
Jennifer Garner Shared an Emotional Message on IG
Travis Scott Discussed His Parenting Style
Kanye West Unfollowed Kim Kardashian on Instagram
Kate Hudson Is Engaged to Danny Fujikawa
J.Lo & Ben Affleck Kiss in Masks at the Met Gala
Who Is Alexandria Ocasio-Cortez's Partner?