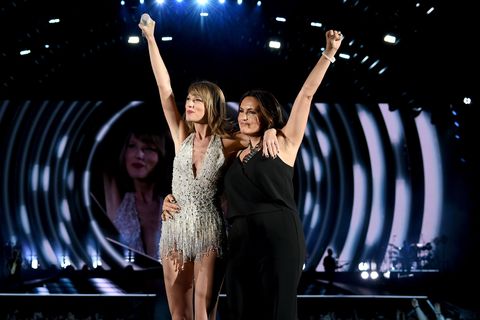 Her brother Austin might have just landed a role in the Pierce Brosnan thriller I.T., but with this rumored primetime project, Taylor keeps her place as Alpha Swift. As if it could be any other way.

In an interview with Entertainment Tonight, Mariska Hargitay revealed that she and Tay Tay, her assassin trainee in "Bad Blood" and SVU fanatic, have discussed the possibility of her guest-starring on the show. "We talked about it," said Hargitay, after whose character Swift named the fluffier of her two cats. "We're going to wait until the end of [Swift] tour to see how it goes. But it's in the air."

To give you a sense of what we can expect when the Oprah of celebrity cameos rolls up on a gurney/into a courtroom as the defendant—a pop star caught in a beef with another pop star who winds up getting offed via a katana to the back—here is her biggest acting credit to date.

Chelsea Peng I'm Chelsea Peng, the assistant editor at MarieClaire.com.
This content is created and maintained by a third party, and imported onto this page to help users provide their email addresses. You may be able to find more information about this and similar content at piano.io
Advertisement - Continue Reading Below
More From Celebrity
Iconic Party Photos From the Past
The Best TV and Movie Wedding Dresses of All Time
Advertisement - Continue Reading Below
40 Celebrity Sisters Who Look So Much Alike
40 Rare Photos of Grace Kelly Through the Years
A Look at Royal Family Portraits Through the Years
The 50 Most Popular Episodes of ‘Friends,’ Ranked