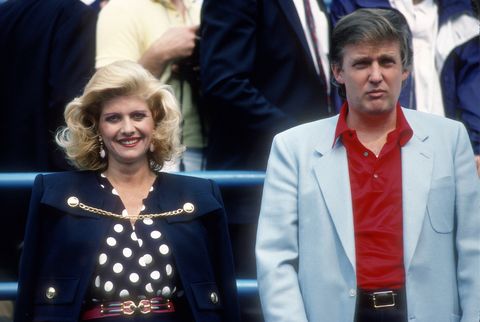 Ivana Trump just gave the best/craziest interview ever to The New York Post, in which she declared that while her ex-husband Donald Trump loves himself some women, he isn't a feminist.

"I don't think he's feminist," she said of her ex. "He loves women. But not a feminist."

Sounds simple, right? LOL, nope. Ivana changed her mind a total of three times after giving this interview. To quote the article itself, "reps called The Post two days after the interview to clarify that Donald was a feminist. Then they called to say he wasn't. An hour later, they said he was."

So, what have we learned? Donald Trump might be feminist...but he probably isn't...but also he totally is! Either way, this seems like a good time to remind everyone of Trump's proposed reality show, Lady and a Tramp, in which he offered to "troll the clubs" looking for party girls to send to charm school. As Trump himself mused: "Unfortunately, who knows that scene better than I do? Somebody's got to do it."