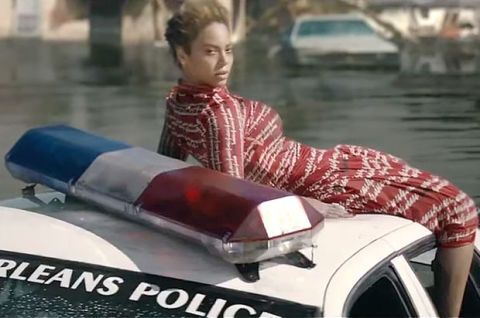 Members of the Coalition of Police and Sheriffs, or C.O.P.S. for short (clever!), protested outside Beyoncé's Houston concert Sunday, even though Beyoncé herself said in her Elle cover story that "anyone who perceives my message as anti-police is completely mistaken."

This might come as a surprise to C.O.P.S. member Tony Ragsdale, who said to KHOU11, "Some of her performances we believe to be anti-police."

The group also shone a blue light toward NRG Stadium and held up posters of Captain America, who, while principled and pure of heart, technically operates outside the law.

Chelsea Peng I'm Chelsea Peng, the assistant editor at MarieClaire.com.
This content is created and maintained by a third party, and imported onto this page to help users provide their email addresses. You may be able to find more information about this and similar content at piano.io
Advertisement - Continue Reading Below
More From Celebrity
Meghan and Harry Share New Archie Photo
The Cambridges Share Their First Full YouTube Vid
Advertisement - Continue Reading Below
Courteney Cox Said the 'Friends' Fountain Was Grim
Meghan Wins Copyright Claim Over Letter to Father
The Royals Wish Archie a Happy Second Birthday
Charles Is Reportedly “Aggrieved” With Harry
Adele Stuns in Rare Birthday Photo Dump
Serena and Olympia Twinned in Swimsuits Again
Joe Jonas Opens Up About Parenting Daughter Willa
Kourtney & Travis Have Talked About Marriage