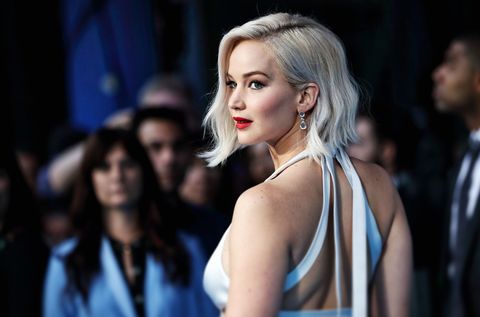 While most of the world is familiar with Oscar-winner Jennifer Lawrence, Harrison Ford's attitude toward her appears to be one of:

The Star Wars actor had no clue who JLaw was when she attempted to dance over to him and J.J. Abrams during a night out with friends, and things got real awkward. "I probably humiliated myself more than ever before," she told Graham Norton. "I never assume anyone knows who I am, but when I spotted Harrison Ford and J.J. Abrams I was like, 'It'll be fine, we're all coworkers, right?'"

Apparently not so much.

"So I went up to them and started dancing like an idiot and the whole table just went quiet and stared at me," she said. "I realized while I am dancing that they had absolutely no idea who I was so I just turned around and walked back to Jack [Whitehall], dying of embarrassment."

Fortunately, Ford figured out who he was dealing with and wrote Lawrence a note "because someone with a 12-year-old must have told him who I was!"

Mehera Bonner Contributor Mehera Bonner is a news writer who focuses on celebrities and royals—follow her on Instagram.
Advertisement - Continue Reading Below
More From Celebrity
Dolly Parton, Icon, Started a Viral Meme
Kylie Threw Stormi the Most Elaborate Party
Advertisement - Continue Reading Below
Chrissy and John Had a Post-Grammys Dance Party
Selena Gomez Sent an Emotional Note to Demi Lovato
Nick Jonas Had Food In His Teeth at the Grammys
Why Isn't Beyonce at the 2020 Grammys?
Watch Demi Lovato's Emotional Grammys Performance
Beyoncé's Pre-Grammys Look
Blake and Gwen Were Too Cute at the Grammys
The Jonas Brothers' Grammys Performance Was a Lot