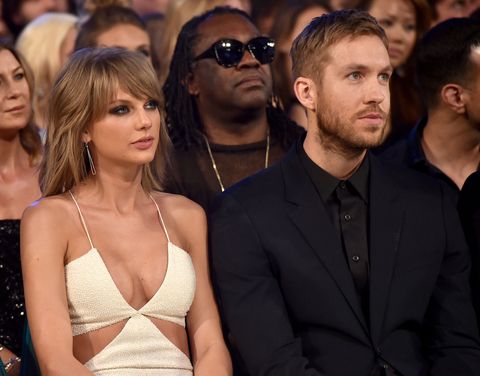 Like a beautiful phoenix rising from the ashes of Tayvin's relationship, Tom Hiddleston frolicked over to Watch Hill to engage in a casual makeout session with Taylor Swift atop a rock—and apparently Calvin Harris was Cher-level clueless. You know, until his attitude morphed into "as if!" and he deleted all traces of Taylor from social media.

"He did not know Taylor and Tom were together," a source says. "[He] has moved on and is happy."

Meanwhile, Ship Hiddleswift is riding the waves of of Rhode Island/our emotions, an unstoppable force that the world just wasn't prepared for. On that note, WWHSD? (What Would Harry Styles Do?)

Mehera Bonner Contributor Mehera Bonner is a news writer who focuses on celebrities and royals—follow her on Instagram.
Advertisement - Continue Reading Below
More From Celebrity
Why Isn't Beyonce at the 2020 Grammys?
Watch Demi Lovato's Emotional Grammys Performance
Advertisement - Continue Reading Below
Beyoncé's Pre-Grammys Look
Blake and Gwen Were Too Cute at the Grammys
The Jonas Brothers' Grammys Performance Was a Lot
Alicia Keys Covers 'Someone You Loved'
Lizzo Opens the Grammys With an Epic Performance
Chrissy and John Win Best Dressed at the Grammys
Sophie Turner Stuns In a Gothic Look
Ariana Grande Is a Disney Princess at the Grammys