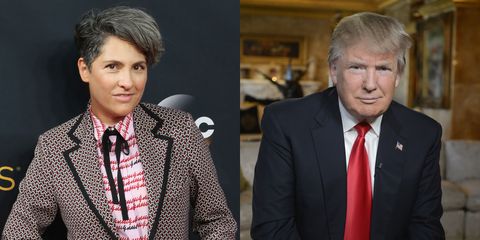 Hitler comparisons aren't exactly a new thing in the world of political mud-slinging, but Transparent creator Jill Soloway just upped the anti by claiming presidential candidate Donald Trump is an "inheritor" to Hitler. The Emmy winner made the following comment backstage after accepting her trophy on Sunday night:

"So Jews were otherized in Nazi Germany to gain political power for Hitler, and right now Donald Trump is doing the same thing. He's otherizing people. He calls women pigs if they don't look like beauty pageant contestants. He blames Muslim and Mexicans for our problems. He makes fun of disabled people. This is otherizing with a capital O, and has been used in our history before to start and win wars, and he needs to be called out every chance he gets for being one of the most dangerous monsters to ever approach our lifetimes. He's a complete dangerous monster, and any moment that I have to call Trump out for being an inheritor to Hitler, I will."

Transparent star (and fellow Emmy winner) Jeffrey Tambor was backstage with Soloway at the time, and added: "By the way, ditto, ditto and ditto on everything you said."

Donald Trump has yet to comment on Soloway's remarks, but one can only assume a tweet is being drafted—presumably with the words "dopey" and "wacky" in the mix.