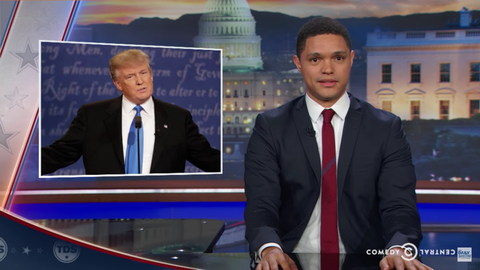 Remember when Donald Trump and Hillary Clinton debated each other and you aged ten years? Their conversation was chock-full of Trump-y gems, but one of the best (by which we mean worst) moments was when Donald Trump nonchalantly implied that he hasn't paid taxes.

In the event that you blacked out during the debate and need a refresher, Trump responded "that makes me smart" when Hillary implied he's "paid nothing in federal taxes." We have no words, so we'll go ahead and let Trevor Noah speak for us.

"I'm sorry, what?" The Daily Show host said. "Dude, taxes are a responsibility, not something to evade. You know? You're running to be the number one citizen of a country, you shouldn't brag about ways you found to get around the rules. He's like, 'Oh, that makes me smart. You see what I did there? Screwed over the American people by not paying my fair share. Ha Ha! Vote for me! Vote for me! See what I did there? I duped you all. You can't see me. I found a way around the rules.' You know who else found a way around the rules? O.J., no one likes him. 'I found this very lucrative financial loophole called crime!'"

Start watching at 5:50 and commence LOLs...but also tears because this is America's reality.