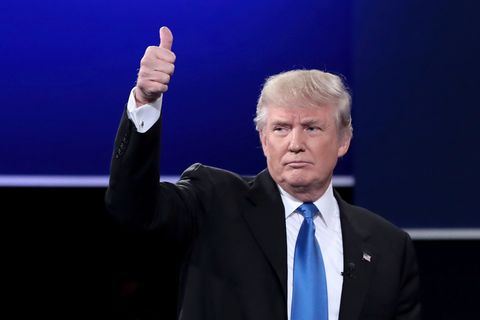 Donald Trump and Hillary Clinton had their first debate last night, and it was super fun and not at all tense. Especially for Bill Clinton, who spent the evening like this:

Speaking of the former president, if you're wondering why Trump didn't bring up his favorite topic—AKA Bill Clinton's cheating scandal—it's because, allegedly, Chelsea Clinton was in the room.

"Everything I wanted to say I got out, except for the transgressions of Bill," Trump said post-debate. "I'm very happy that I was able to hold back on the indiscretions with respect to Bill Clinton because I have a lot of respect for Chelsea Clinton, and I just didn't want to say what I was going to say."

Right, because Chelsea's presence is the only reason not to bring up this topic. Never mind the fact that Bill's "transgressions" have zero to do with Hillary's ability to run the country...

Also, did Trump really hold back on throwing shade at the debate? Not according to this quote from behind the podium: "I was going to say something extremely rough to Hillary, to her family. And I said to myself I can't do it. I just can't do it. It's inappropriate, it's not nice."

Soooo...this is the IRL equivalent of a subtweet, yes?

Mehera Bonner Contributor Mehera Bonner is a news writer who focuses on celebrities and royals.
This content is created and maintained by a third party, and imported onto this page to help users provide their email addresses. You may be able to find more information about this and similar content at piano.io
Advertisement - Continue Reading Below
More From Celebrity
Ben Affleck Had Dinner With J.Lo and Her Kids
Jessica Biel Talked "Secret COVID Baby" Phineas
Advertisement - Continue Reading Below
Katie Holmes Paired Baggy Jeans With a White Tank
Why Rachel McAdams Turned Down 'Devil Wears Prada'
Did the Queen's Brooch Send a Message?
Jennifer Lopez and Ben Affleck: Everything We Know
What Happens on Katie's Season?
A Look Back at Gwen Stefani & Blake Shelton's Love
Beyoncé Celebrates Twins Rumi and Sir Turning 4
Katie Nails Casual Cool in Jeans, Tee, and Loafers