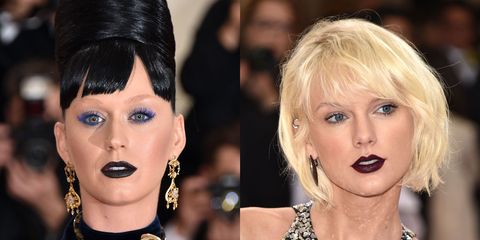 Katy Perry and Taylor Swift both attended this year's Met Gala, and good news: Andy Cohen was also there, and he has a story. (Pssst: in case you hadn't gathered as much based on years of tension and shade, the pop stars have bad blood.)

So here's the deal: apparently Cohen sidled up to Swift at the party and made a joke about her sitting with Perry. At this point, the following completely iconic exchange went down:

"Why I felt I needed to get involved I will never know (maybe I was auditioning for her squad?) but I innocently said exactly the wrong thing to her, which was, 'Your friend Katy is sitting in the corner and there's plenty of room around her,'" Cohen writes in his book Superficial: More Adventures from the Andy Cohen Diaries. Swift then quipped, "Katy who?"

"I said, 'Perry,' at which point she clearly let me know that she's the exact opposite of her friend," Cohen continues, adding that Swift asked him not to mention the incident on his show. "She didn't threaten me about putting it in my book, so here we are."

"Katy who?" is basically the 2016 version of "I don't know her," so let's go ahead and gaze upon this GIF for a few minutes.