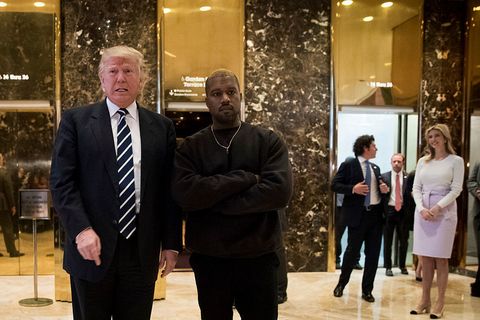 At around 9 a.m. on Tuesday, Kanye and his entourage walked into Trump Tower in NYC to take a meeting with president-elect Donald Trump. When they emerged in the Tower's lobby together about an hour later and were asked what they talked about, Trump vaguely responded "Life" while Kanye said "I just want to take a picture right now."

People did not take well to this mysterious visit. Here are some of the best celebrity reactions:

Trump not taking security briefings but meeting with Kanye West as he appoints Rick Perry 2 head a department he wants to end. Anyone care?

What's it called when one gets impeached before one actually takes office?

I think it's called a stroke of necessary GENIUS at this point https://t.co/99Eo94B1MZ

Trump uses Kanye as a distraction for media nonsense so that his refusal t announce business divestments gets buried. UNREAL. #Resist https://t.co/8ZwuoMDNnt

BREAKING NEWS: Kanye West just entered Trump Tower.
This is not a drill, or a joke.

I don't know what Kanye said to Trump today, but I just saw on @CNN that "Jesus Walks" is the new national anthem?

What the fuck is happening? https://t.co/VV8ChnTglZ

Kanye has since explained that he was there to talk about "multicultural issues," so. Yeah.