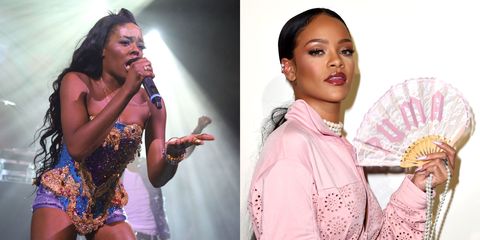 Over the weekend, celebrities used their platforms to decry Donald Trump's controversial, immoral, and potential unconstitutional immigration ban. Except for Azealia Banks, of course, who was completely on board. The always-pot-stirring celeb felt the need to slam Rihanna for defending immigrants, posting an alternate opinion. (Please note the reference to chickens, because that'll come up later.)

Rihanna responded to Azealia in the most Rihanna way ever, by posting a selfie with the hashtags #stayawayfromthechickens and #saveourhens. Oh, and her navy went ahead and starting spanning Azealia's posts with chicken emojis. 🐔

Epically, the night ended with Rihanna changing her Twitter avatar to a photo of Azealia's number (which we won't include here for privacy reasons), and then promptly changing it to this:

After which, Azealia pulled a this:

The end. For now.