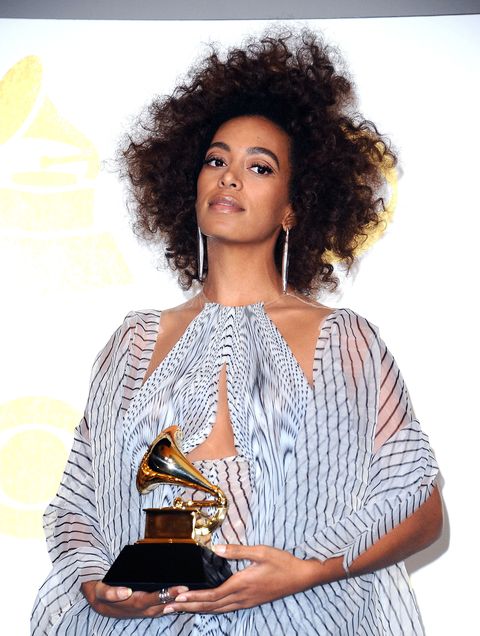 Beyoncé lost Album of the Year at the Grammy Awards, a shocking upset that even winner Adele didn't feel great about. And while 25 was an amazing album, Lemonade was a social and—yes—even political movement. The fact that it was passed over is a true disappointment, and has many people taking a hard look at favoritism towards white artists.

With that in mind, it makes perfect sense that Beyoncé's sister Solange would hop on Twitter and re-post Frank Ocean's note about the Grammys—in which he calls out the Powers That Be.

"I'VE ACTUALLY BEEN TUNING INTO CBS AROUND THIS TIME OF YEAR FOR A WHILE TO SEE WHO GETS THE TOP HONOR AND YOU KNOW WHAT'S REALLY NOT 'GREAT TV' GUYS? 1989 GETTING ALBUM OF THE YEAR OVER TO PIMP A BUTTERFLY. HANDS DOWN ONE OF THE MOST 'FAULTY' TV MOMENTS I'VE SEEN. BELIEVE THE PEOPLE. BELIEVE THE ONES WHO'D RATHER WATCH SELECT PERFORMANCES FROM YOUR PROGRAM ON YOUTUBE THE DAY AFTER BECAUSE YOUR SHOW PUTS THEM TO SLEEP. USE THE OLD GRAMOPHONE TO ACTUALLY LISTEN BRO, I'M ONE OF THE BEST ALIVE. AND IF YOU'RE UP FOR A DISCUSSION ABOUT THE CULTURAL BIAS AND GENERAL NERVE DAMAGE THE SHOW YOU PRODUCE SUFFERS FROM THEN I'M ALL FOR IT."