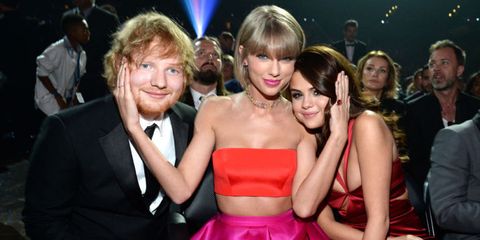 In 2013, Ed Sheeran hit the road with his collaborator/BFF Taylor Swift as the opening act on her Red tour. In addition to warming up the crowds and joining Swift onstage for their duet "Everything Has Changed," Sheeran spent lots of time offstage hanging out with Taylor and her squad.

Oh, and he also apparently spent a fair amount of time sleeping with members of said squad. So there's that.

In a new interview with Rolling Stone, Sheeran talked about "often" waking up next to Taylor's friends, although he stopped short at naming names.

"Taylor's world is celebrity," he said. "I was this 22-year-old awkward British kid going on tour with the biggest artist in America, who has all these famous mates. It was very easy.…I would often find myself in situations just kind of waking up and looking over and being like, 'How the f*ck did that happen?'" 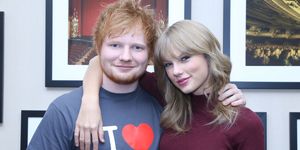 Kayleigh Roberts Kayleigh Roberts is the weekend editor at Marie Claire, covering celebrity and entertainment news, from actual royals like Kate Middleton and Meghan Markle to Hollywood royalty, like Katie Holmes and Chrissy Teigen.
This content is created and maintained by a third party, and imported onto this page to help users provide their email addresses. You may be able to find more information about this and similar content at piano.io
Advertisement - Continue Reading Below
More From Celebrity
Chelsea Handler Skied Naked for Her 46th Birthday
How Kristen Stewart Is Prepping to Play Diana
Advertisement - Continue Reading Below
How to Make the Queen's Favorite Cocktail
The Queen Told Harry to Uphold His Family Values
Twitter Is Thirsting over Prince Harry
Gabrielle Union Just Wore a Daring 2000s Trend
28 ‘Real Housewives’ Who Left The Franchise
Queen Elizabeth Fun Facts
Celebrities Who Don't Use Their Real Names
63 of the Shortest-Lived Celeb Marriages