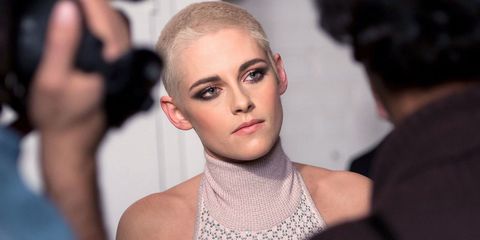 Back before he was POTUS, Donald Trump was the unofficial president of the Robert Pattinson Fan Club. At least, that's the only reasonable explanation for how many times he tweeted about the actor's breakup with Kristen Stewart while throwing tremendous shade her way.

Kristen addressed Trump's obsession with hating her during SNL, but the subject also came up during an appearance on The Late Show with Stephen Colbert, who asked KStew for theories about why Trump doesn't like her.

Her ultra chill response? "Uhhhh...I don't know," she said. "I tried to [talk to him about it]. He didn't respond. I did it publicly and he didn't publicly respond. I was kinda disappointed. I don't know, man. We're all different, that's okay. Celebrate the differences, you know, whatever."

Hmmm, Trump could certainly learn a thing or two about celebrating differences....

Mehera Bonner Contributor Mehera Bonner is a news writer who focuses on celebrities and royals.
This content is created and maintained by a third party, and imported onto this page to help users provide their email addresses. You may be able to find more information about this and similar content at piano.io
Advertisement - Continue Reading Below
More From Celebrity
J.Lo "Likes" Shady IG Post After A-Rod Split 👀
Beyoncé Shares Photos of Her White Power Suit
Advertisement - Continue Reading Below
Will & Kate Welcomed Harry Back Into Their Group
Queen Left a Handwritten Note on Philip's Coffin
The Queen Said Grief Is the Price We Pay for Love
All of the Photos from Prince Philip's Funeral
The Queen Wore This Brooch to Philip's Funeral
Kate Middleton's Nod to Diana at Philip's Funeral
Queen Elizabeth Appears at Prince Philip's Funeral
Harry Back With Will & Kate at Philip's Funeral