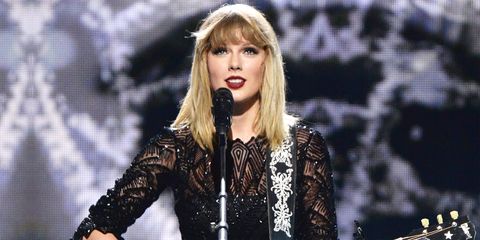 As someone who's had an on-off-on-enough-to-do-commericals-for-them relationship with digital music-streaming services in the past, Taylor Swift might now be getting into the business herself.

According to Entertainment Weekly, the chanteuse, who's been making herself scarce lately, is reportedly in the process of launching an online hub that might offer downloads and other exclusive content, following a model established by artists such as Phish, Pearl Jam, and Bruce Springsteen. (TMZ reports she might also be getting into producing guitars and guitar picks, but that's TBD.)

In the past, she's famously battled Apple Music and spurned Spotify—all you can still hear on there is "I Don't Wanna Live Forever"—so this act could be seen as sticking it to Big Listenin'.

Unless, of course, it hosts the grand reveal of her new album—coming Christmas 2017, if Ed Sheeran has anything to say about it.