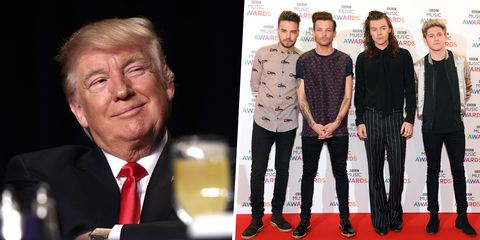 Much like he's not here for Obama, immigrants, or Kristen Stewart, Donald Trump is NOT here for One Direction. The beloved boy band appear to be on POTUS' celebrity shit list thanks to this one awkward time they stayed at his hotel and refused to meet his daughter.

"Trump actually kicked us out of his hotel once," Liam Payne recently revealed during an interview. "You wouldn't believe it. It was about [meeting] his daughter. He phoned up our manager and we were asleep. He said 'Well, wake them up,' and I was like 'no,' and then he wouldn't let us use the underground garage."

"Obviously, in New York we can't really go outside," Payne continued. "New York is ruthless for us. So he was like, 'Okay, then I don't want you in my hotel.' So we had to leave."

File this under Truly, WTF.