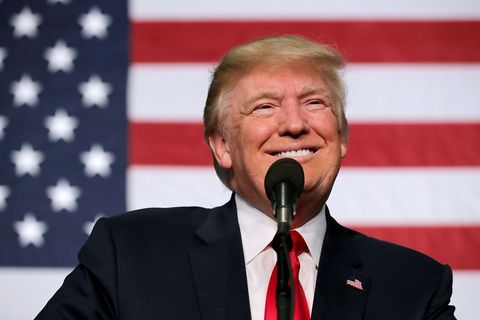 According to an extensive report, Donald Trump—adult male who is 70—insists on having two scoops of ice cream at dessert. A reasonable request by anyone's standards, except the thing is he makes sure everyone else has just *one* scoop.

The waiters know well Trump's personal preferences. As he settles down, they bring him a Diet Coke, while the rest of us are served water, with the Vice President sitting at one end of the table. With the salad course, Trump is served what appears to be Thousand Island dressing instead of the creamy vinaigrette for his guests. When the chicken arrives, he is the only one given an extra dish of sauce. At the dessert course, he gets two scoops of vanilla ice cream with his chocolate cream pie, instead of the single scoop for everyone else. The tastes of Pence are also tended to. Instead of the pie, he gets a fruit plate.

Obviously there's a lot to...well...make fun of here, and Twitter is on it:

Trump fired Comey because he asked for 2 scoops of vanilla ice cream after dinner.

But, to be honest it sounds like Trump knows what's up when it comes to ice cream scoops.