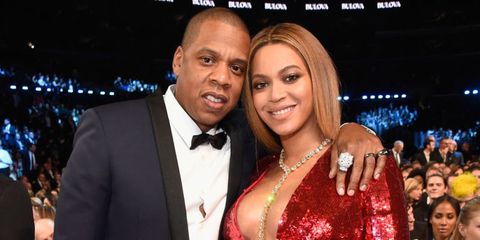 The internet is running wild with speculation that Beyoncé has given birth to her and Jay Z's new twins. There's been "heavy security" reported outside UCLA Medical and several members of Bey's family have been spotted visiting the hospital.

Now, another visitor to the hospital has Twitter captivated. As E Online reports, an unidentified woman was spotted at the hospital Friday, with a bouquet of pink, purple and blue flowers and two huge pink and blue balloons. As if the colors were enough of a hint, the balloons says "Baby Girl" and "Baby Boy."

But the part of the story that really has people obsessed? The balloons and flowers also had a card, which read, simply: "B & J."

Since there still hasn't been an official announcement about the birth (let alone the sex of the twins), these pictures have people speculating that Beyoncé and Jay Z just welcomed a boy and a girl. It's not conclusive evidence, but we also can't blame people for freaking out a little (okay, a lot).

Kayleigh Roberts Kayleigh Roberts is the weekend editor at Cosmo, focused on celebrity news and royals.
This content is created and maintained by a third party, and imported onto this page to help users provide their email addresses. You may be able to find more information about this and similar content at piano.io
Advertisement - Continue Reading Below
More From Celebrity
Meghan Markle Might Not Ever Go Back to the UK
Are Angelina Jolie and The Weeknd Dating?
Advertisement - Continue Reading Below
Kate and Will Ate Burgers With Their Kids
Meghan Markle's Handbag Was a Nod to Diana
Ben Affleck and Jennifer Lopez Made Out in NYC
Lady Gaga Stunned in an Old Hollywood Look
Olivia Rodrigo Looked Jaw-Droppingly Beautiful
Will's "Alleged Bullying" Drove the Sussexes Out
Sam Asghari Opens Up About Britney Documentaries
Prince Harry’s Memoir Is Concerning Royal Insiders