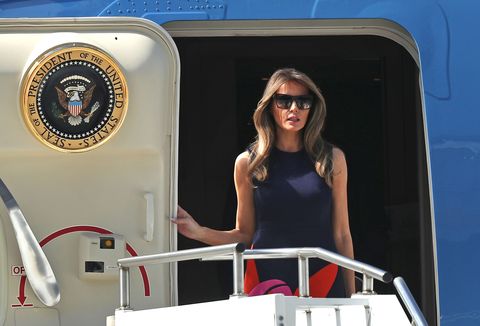 Melania Trump is currently in Hamburg for the G-20 summit with her husband president Donald Trump, and apparently she's trapped in her hotel. Basically, it's R. Kelly and that closet all over again.

First Lady Melania Trump has not been able to leave her Hamburg residence this morning/afternoon due to protests, per pooler @AlliemalCNN https://t.co/1w0ek6sAop

Per CNN White House press pooler Allie Malloy, FLOTUS has been unable to leave her temporary residence thanks to intense protests taking place all over Hamburg, which have lead to many arrests.

Thinking of those hurt in #Hamburg protests. Hope everyone stay safe! #G20

Apparently, Melania was scheduled to attend an event for spouses of world leaders, which had been put together by Angela Merkel's husband. Everyone from French President Emmanuel Macron's wife Brigitte Macron to Justin Trudeau's wife Sophie Grégoire Trudeau were spotted on a sightseeing tour, while Melania remained inside.

Police won't clear @FLOTUS to leave residence in Hamburg right now b/c of protests, her spox confirms: ""It's unfortunate."