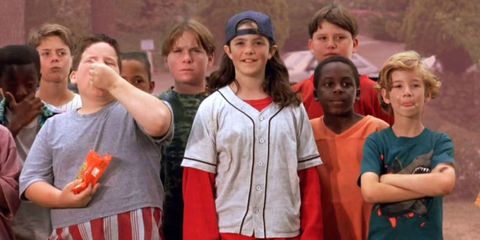 Growing up as a child of the late '80s/early '90s, there was one consistent theme that dominated my demo's movies: sports. From the Mighty Ducks to Little Giants to Sandlot to Rookie of the Year to the Big Green...everyone was in a jersey, throwing a ball, or banding together for a rag-tag team.

I didn't play sports. I danced in elementary and middle school (I can do a mean Broadway Step, FWIW), but other than the hula-hooping "award" I got in first-grade gym, I was no athlete. The only trophies I won were for spelling and language arts. But that didn't matter. I loved these movies—and looking back, they informed a lot of my thoughts about women and feminism and being a kick-ass person.

In Mighty Ducks, female representation is basically limited to Connie in the first movie (sorry Tammy), and then Julie "the Cat" joins the mix—two awesome players who can hang with the boys, still compete, and never be thought of as "less than." In Rookie of the Year, a seemingly boy-centric movie turns into a fun nod to the power of women—his mom was the pitcher he had heard so much about, not his dad—and she's the one who helps him finish out the game. And in Little Giants, the Icebox AKA Becky grapples with growing up, being seen as "desirable" by her crush, and then realizes that she can be a killer football player and be an appealing female. (She don't need no stinkin' cheerleading outfit.)

In fact, that particular movie is an entire homage to kids and girls who don't think they fit in—after not being picked for the main peewee football team because, essentially, she's a girl (despite being the best player to try out), Becky forms her own team. Perhaps the best interaction is when, after recruiting new players including Spike (a huge/trained player) and Junior (everyone's '90s crush), Spike tells Icebox that "Spike don't play with girls."

Becky: "I can take you anytime, anywhere."

Becky: "You can talk the talk, but can you walk the walk?"

Even though she takes some time to figure out what she wants (cheerleader vs. player), Becky crushes him in the final game and tells Junior that he can "call her Becky"—meaning you better get with it, dummy. (Also—can we talk about how her dad encouraged her to choose whatever made her happy, even if it was a skirt and pom poms?)

We were taught that you can be a part of a team without having to stand on the sidelines. But beyond sports, we were taught that we can be just as good (if not better) than the boys. And whether that was purely the device of some marketing-savvy screenwriter or not, it didn't really matter—it was something all girls at that age needed to hear.

We were taught that when we do the things we want to do—the things that make us happy, even if they're not the things that are expected from us—it makes us a part of something bigger. A part of a movement. An unstoppable force. A game in which the good side always wins. And that's pretty dope.