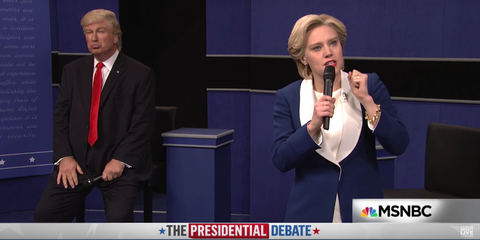 To some, last week's second, Town Hall presidential debate felt like an SNL sketch—and, as the SNL writers confirmed last night, it really didn't need a lot of tweaking to be turned into one. The show cold-opened with another fantastic spoof, where every big moment—Donald Trump's lurking-turned-outright-scaring Hillary Clinton, the introduction of new internet icon Ken Bone, the candidates' lack of handshake, you name it—was incorporated in there. The result is one of the show's best debate sketches yet.

Alec Baldwin and Kate McKinnon reprised their roles as Trump and Clinton—and easily proved they remain among the show's best. But McKinnon in particular really had her moment when the show tackled that last 'what do you guys like about each other?' question. As they translated it:

"Tonight Donald Trump said you should be in jail, he said you had hate in your heart, and he followed you around stage like a shark. So my question is what do you like about him?"

McKinnon as Clinton: "Well, this one's actually easy. Donald Trump and I disagree on almost everything but I do like how generous he is. Just last Friday, he handed me this election."

Watch it all below:

Trump did, and he couldn't help but share his response:

Alyssa Bailey News and Strategy Editor Alyssa Bailey is the news and strategy editor at ELLE.com, where she oversees coverage of celebrities and royals (particularly Meghan Markle and Kate Middleton).
Advertisement - Continue Reading Below
More From Culture
Family Movies Both Grown-Ups and Kids Will Love
The Best Wedding Movies of All Time
Advertisement - Continue Reading Below
Read 'Anna K' Even If You Didn't Read the Original
19 Most Underrated Films of All Time
The Music Podcasts We Keep Pressing Play On
Why You Keep Seeing "Until Tomorrow" on Instagram
The 19 Best Murder Mystery Movies
How to Join Marie Claire's Online Book Club
'In Five Years' Is MC's April Book Club Pick
'Little Fires Everywhere' Is a '90s Time Capsule