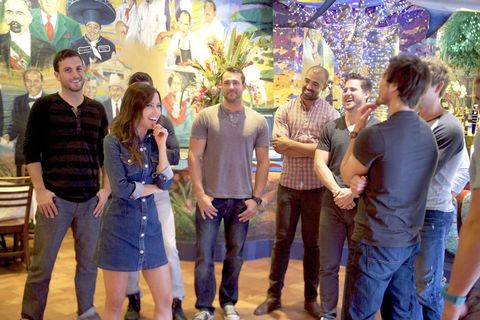 What is it about the guy who shows up out of the blue—who no one else trusts—that you can't seem to get enough of? Just one drama-packed episode of this season of ABC's reality show The Bachelorette might help you find out.

Star Kaitlyn Bristowe began the eleventh season with 25 more-than-eligible bachelors (we're talking Chris "Cupcake" Strandburg, sweet and gentlemanly Jared Haibon, and not one, but two amazing guys named Ben), where she repeatedly professed at the cocktail parties, "I feel that my husband is in this room." Everything (more or less) seemed fairy tale-worthy—until the fifth episode when host Chris Harrison hit everyone with a whammy: Last summer's runner-up Nick Viall, rejected by former Bachelorette Andi Dorfman, would reenter the picture and join the other men in the house. Claiming an interest in Kaitlyn since watching her leave last season of The Bachelor broken-hearted, he immediately skyrocketed to the top of Bristowe's Lust List.

He has since become "the other guy," as fan favorite Shawn Booth likes to say (Bristowe will choose between the two on tonight's season finale). And let's face it—we all kind of get it, right? Don't we all, at some point and in some way, have our own version of the other guy we like to keep in our orbit, even if we know we shouldn't? The guy we probably shouldn't end up with but like to entertain the idea of anyway?

Here's why Bristowe—and lots of other women—can't shake him off.

1. Even guys who meet every qualification on the Relationship Checklist can bore you to tears.

Self-explanatory, right? Sometimes chemistry can come from the unlikeliest of places.

2. The other guy is surprising.

There is an appeal to that curveball thrown at you from left field—a taste of something that wasn't in the cards—like a Choose Your Own Adventure story, but real.

3. Sometimes listening to your friend's "sensible" advice sucks—especially since you wouldn't date any of her boyfriends anyway...

Sometimes, you need to figure it out for yourself.

4. In a world of newsfeeds, he still manages to keep your attention.

A partner needs to be capable of holding a conversation riveting enough that it makes someone question the meaning of life. Otherwise, you might as well just return to trolling people on Coffee Meets Bagel.

5. Sometimes, the chemistry is just too much to deny...even if it doesn't work out.

The "other guy" very well might be a temporary tryst with no intention of a future, which is fine. You don't have to drag every person who swipes right down the aisle. (Except this *is* The Bachelorette, so who knows...)

Catch the finale tonight at 8/7 c on ABC.

This content is created and maintained by a third party, and imported onto this page to help users provide their email addresses. You may be able to find more information about this and similar content at piano.io
Advertisement - Continue Reading Below
More From Culture
The Sexiest Movies on Amazon Prime
HBO Is Giving Fans 2 Special 'Euphoria' Episodes
Advertisement - Continue Reading Below
What to Know About Tayshia's 'Bachelorette' Cast
Clare Crawley's 'Bachelorette' Cast Is Out
Dale Moss Is a Super Important 'Bachelorette' Star
It's Been a Weird Year for 'The Bachelorette'
Lessons From Frida Kahlo in Embracing My Culture
19 Documentaries on Netflix to Watch Right Now
What Happened to the 'Chicago 7' After the Trial?
A Mom of 3 Drowned. Her Death Remains a Mystery