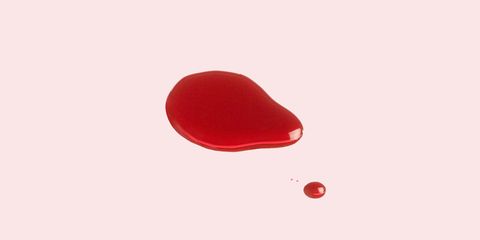 To protest Instagram removing images of period blood—most notably that of poet and student Rupi Kaur, which were later replaced—Temple University student Louelle Denor posted a photo of her used menstrual cup, bloodied post-removal fingers and all.

Then the internet slime attacked, leaving death threats and suggesting she add jet fuel to her shower so she'd burn.

This is what happens when you post a picture of #blood and say that it's from your #vagina and it gets regrammed. @__emicasz__ says that #feminists these days are so fucking stupid. @martinghalle wants to #kill people like me. @imthehitlerofmemes says that #feminazis should have #semen sprayed in their faces. @dank.meme.machine suggests that #feminists should be #burnedalive #burned. The two of them decide that, really, #jetfuel should be used. And @the.almighty.count.dankula says I should #killmyself #commitsuicide #suicide. All of that over a picture of blood? #overreacting? #bored Http://instagram.com/p/6ykYMTxmRX/ And I guess I should thank @sendmenudesorillkillyourfamily. Thanks, bro! #feminism #feminist #periodblood #periodshaming #menstrualblood #menstruation #misogyny #womenhating #sexism #blood #shame #threats #hate #hatecrime #period #mensrights

As the abuse continues, so does the staggering amount of opposition to women celebrating or even acknowledging their periods. In August, Kiran Gandhi ran a marathon while free-bleeding; she was called "disgusting," "nasty," and worse. In March, Instagram deleted student Rupi Kaur's menstruation-centric photo series twice before apologizing. And then, of course, there's that painfully tone-deaf Donald Trump remark about Megyn Kelly having "blood coming out of her wherever."

"It is socially acceptable to show blood shooting out of the human body on the news and in every form of media we consume," Denor wrote on Medium of society's double standard. "But what we don't tolerate is the sight of blood when associated with the vagina EVEN when the vagina is not shown. This is a problem."

The answer, then, must be removing the stigma and shame and "they make women irrational and fat because fat equals gross"-ness surrounding periods. But judging by the response, we're still a long, long way away.