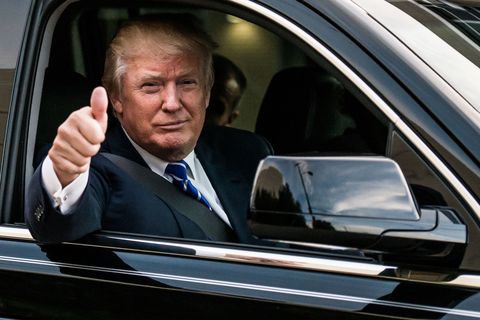 While the rest of the world is admonishing The Academy for its lack of diversity in this year's nominee pool, Donald Trump is raising concern over the bigger (read: completely irrelevant) issue. The fact that white people don't win BET Awards. *Slams head on desk*

"The whites don't get any [BET] nominations," Trump mused on Fox & Friends. "I never even thought of it from that standpoint."

You know who did think of it from that standpoint? All the other people out there who don't understand that maybe (just maybe) the BET Awards are hugely important—especially considering that black actors have almost zero representation at the Oscars, an awards ceremony that claims to be intersectional and industry-defining.

"I saw someone on your show today saying, 'Well, what do we do with BET, Black Entertainment?'" Trump said, referring to comments Stacey Dash made about ending the BET Awards. "I thought it was an amazing interview actually. I never even thought of it from that standpoint. It would certainly be nice if everybody could be represented properly. And hopefully that's the case. But perhaps it's not the case. It's a—it's a difficult situation."

Words of whatever the opposite of wisdom is, right there.

Mehera Bonner Contributor Mehera Bonner is a news writer who focuses on celebrities and royals—follow her on Instagram.
This content is created and maintained by a third party, and imported onto this page to help users provide their email addresses. You may be able to find more information about this and similar content at piano.io
Advertisement - Continue Reading Below
More From Culture
You *Need* to Follow the 'Bling Empire' Cast on IG
Watch the Trailer for the New 'Euphoria' Special
Advertisement - Continue Reading Below
We've Getting a Season 2 of 'Bridgerton'
New Drama Movies That Promise to Move You
The Sexiest New Movies of the Year
A Look Back at Princess Anne's Life in Photos
Where Is the Cast of 'Gilmore Girls' Now?
'The Bachelor' Is Back!
Who Is "Queen" Victoria on 'The Bachelor'?
Matt James' 'Bachelor' Cast: Everything We Know