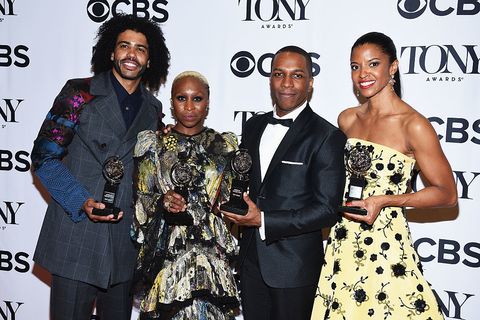 This year's Tony Awards were notable for a number of reasons. But, in the year of #OscarsSoWhite, the Tonys responded by honoring four actors of color with major performance awards. It's the first time this has happened in the 70-year history of the Tonys.

"There's so much diversity on Broadway right now," said Diggs in the Tonys press room. "I'm very proud to be a part of it."

Lin-Manuel Miranda, the genius behind Hamilton, has been open about his desire to create a largely nonwhite cast for his show. The New York Times has even reported criticism in response to Miranda's position. But if this year's Tony Awards are any indication, Miranda is clearly on to something.

This year's Tonys brought in the highest ratings in 15 years, Entertainment Weekly reports. Let's hope these diversity achievements on Broadway spark a trend in the entertainment industry as a whole. As James Corden said in his opening monologue, "Think of tonight as the Oscars, but with diversity." So yeah, Academy Awards, we're talking to you.

This content is created and maintained by a third party, and imported onto this page to help users provide their email addresses. You may be able to find more information about this and similar content at piano.io
Advertisement - Continue Reading Below
More From Culture
Will There Be a Season 3 of 'Virgin River'?
The New Horror Movies That'll Leave You Breathless
Advertisement - Continue Reading Below
'Bachelor In Paradise' 2021: Everything We Know
Zendaya Shared a Teaser of 'Euphoria' Season 2
Listen to the Best New Love Songs of 2021 (So Far)
Meet the Cast of 'Too Hot to Handle' Season 2
Meet the Cast of Katie's 'Bachelorette' Season
Simone Biles: "Don't Be Ashamed of Being Great"
68 Movies That Are Just Fully About Sex
Everybody Loves Annie