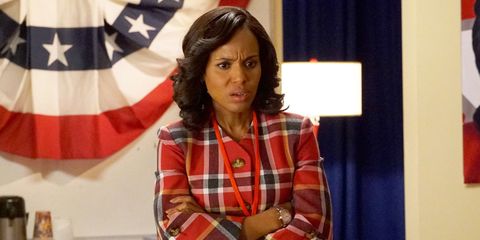 It's been a long, cold, sad winter, and it was made even worse by the fact that every great TV show was rudely on hiatus. And just when you thought a reprieve was coming, politics takes it away. Yes, it turns out that the return of all your Shondaland favorites was pushed back a week, and it's all Donald Trump's fault. (Well, indirectly.)

Entertainment Weekly reports that Grey's Anatomy, How to Get Away With Murder, and Scandal are all being pushed back a week from their original starting date. Instead of airing on Thursday, January 19, the Shonda Rhimes shows will all air on Thursday, January 26. ABC says that they moved everything back so the "TGIT" return would have all three episodes be original and new. But what's replacing it might not be so nice to Scandal junkies.

On Thursday, January 19, ABC will instead air America's First Family: The Trumps Go to Washington, a 20/20 special perfectly timed to Donald Trump's presidential inauguration. So instead of watching Olivia Pope fix all of fictional Washington, ABC viewers will instead get a dose of political reality. And that's not quite the content to organize a viewing party around.

In the meantime, get excited about plot twists to come with this promo, and start stockpiling on red wine and popcorn.

This content is created and maintained by a third party, and imported onto this page to help users provide their email addresses. You may be able to find more information about this and similar content at piano.io
Advertisement - Continue Reading Below
More From Culture
The Scariest Movies on Netflix
'The Undoing' Is Fall's Most Thrilling Drama
Advertisement - Continue Reading Below
It's Been a Weird Year for 'The Bachelorette'
When Does 'The Bachelorette' Air?
Fashion Fanatics Will Love Jenna Lyons’ New Show
Your Favorite Teen Heartthrobs Then vs. Now
Halloween Costumes You Can Wear for Work Zooms
'Empire Records' Helped Me Understand My Queerness
Iconic '90s Movies to Binge-Watch Right Now
HBO Is Giving Fans a Special 'Euphoria' Episode