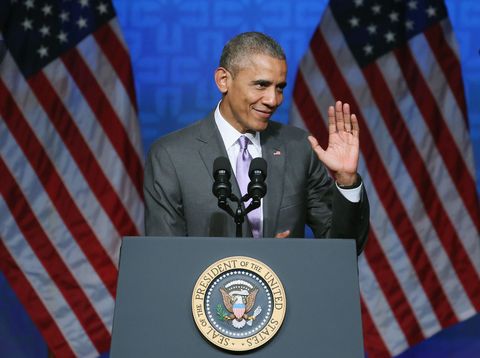 If you don't follow former White House photographer Pete Souza on Instagram, you should, because a) his photos offer amazing behind-the-scenes access to the Obama administration, and b) he's been low-key trolling Donald Trump with the following hilarious posts. (P.S. Stay up-to-date on all the Trump antics described below here.)

1. When reports surfaced that Trump's team can't find White House light switches and are meeting in the dark, Souza shared this:

2. When news broke that Trump told Mexican president Enrique Peña Nieto that he needed to deal with "bad hombres," Souza shared a snap of Obama and Peña Nieto having drinks.

This one is for Grover. President Obama sampling some tequila with President Enrique Peña Nieto of Mexico in 2013. @heygrover

3. When Trump tried to institute an immigration ban, Souza went ahead and published this photo of Obama talking to a refugee.

Talking with a young refugee at a Dignity for Children Foundation classroom in 2015.

4. When Trump pissed off literally all of Australia after his news-making phone call with prime minister Malcolm Turnbull, Souza posted this:

Nice to see pics online of my former boss kite surfing last week. He did occasionally body surf during Christmas break in Hawaii every year.

Mehera Bonner Contributor Mehera Bonner is a news writer who focuses on celebrities and royals—follow her on Instagram.
Advertisement - Continue Reading Below
More From Culture
Ryan Murphy's Producing a Love Letter to Hollywood
This Is When the 'Love Is Blind' Finale Will Drop
Advertisement - Continue Reading Below
Will Gigi and Damian Actually Get Married?
Princess Latifa's Great Escape
Nobody Can Stop Talking About 'Love Is Blind'
Great New Movies Based on Real Events
You Can Now Take a 'Love Is Blind' Vacation
The Best New Music of 2020 (So Far)
Will Hannah Ann Sluss Be the Next 'Bachelorette'?
The 13 Sexiest Movies on Netlfix