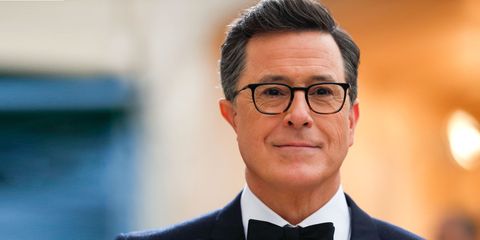 In his first 104 days, President Donald Trump has given comedians a steady stream of material. His every interview, tweet, and executive action is open fodder for a Saturday Night Live sketch or black-tie roast, while late-night television hosts provide a daily skewering of the president's gaffes. Still, Late Show host Stephen Colbert's most recent tirade was so dark it's kind of incredible that he made it past CBS censors—and now, Trump supporters are calling for him to be fired.

"You're the presi-dunce. But you're turning into a real prick-tator," Colbert said in a direct address to President Trump. "Sir, you attract more skinheads than free Rogaine. You have more people marching against you than cancer. You talk like a sign language gorilla who got hit in the head. In fact, the only thing your mouth is good for is being Vladimir Putin's c-ck holster."

The last joke got the biggest reaction from his live studio audience, and is the main line upsetting people on Twitter, who blast the host's comment as homophobic. #FireColbert was a top trending topic on Tuesday night, as conservatives called for his termination, and liberals taunted them back, calling out the outcry over supposed homophobia a hypocritical response.

Colbert has yet to respond to the controversy, but he also hasn't tweeted himself in two days.

Tonight: watch as @StephenAtHome gets President Trump to sum up his first #100Days in office in just four words. #LSSC pic.twitter.com/tOzxsI8WMS

Kaitlin Menza Kaitlin Menza is a freelance features writer.
This content is created and maintained by a third party, and imported onto this page to help users provide their email addresses. You may be able to find more information about this and similar content at piano.io
Advertisement - Continue Reading Below
More From Culture
Fans Are Ready for Second Season of 'Bling Empire'
What We Know About Part 2 of 'Lupin'
Advertisement - Continue Reading Below
You *Need* to Follow the 'Bling Empire' Cast on IG
Watch the Trailer for the New 'Euphoria' Special
We've Getting a Season 2 of 'Bridgerton'
New Drama Movies That Promise to Move You
The Sexiest New Movies of the Year
A Look Back at Princess Anne's Life in Photos
Where Is the Cast of 'Gilmore Girls' Now?
'The Bachelor' Is Back!