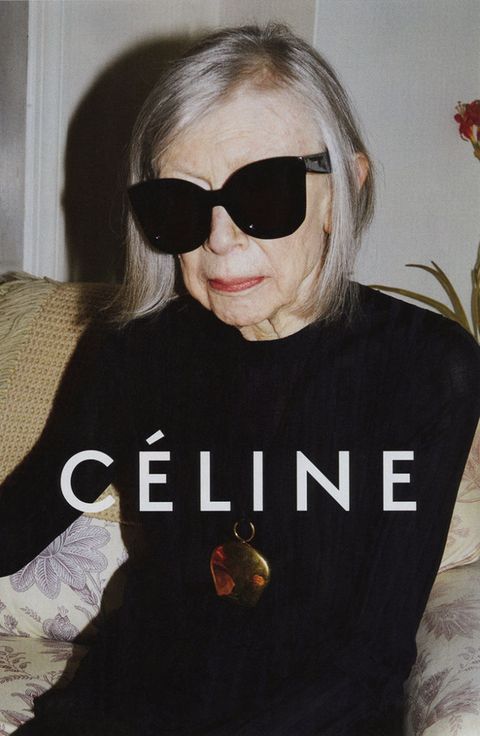 Joan Didion's name has been in the air recently, in part thanks to a spate of leaving-New-York stories from the likes of the New York Times and Vogue that harken back to her seminal 1967 essay "Goodbye to All That," and in part because there's an upcoming Kickstarter-funded documentary in her honor.

But nothing proves the revered writer's modern cultural relevance more than the fact that she appears in Céline's Spring 2015 ad, photographed by Juergen Teller. Didion takes the reigns from perennial It model Daria Werbowy in a close-up shot against a strong flash (a Teller tell-tale), wearing signature Céline sunnies, a simple black dress, and a gilded pendant necklace, hair in a neat gray bob.

Phoebe Philo creates clothes for the thinking lady, so it only makes sense. And for Spring 2015, the designer took a trip back in time to reference the '60s and '70s, decades when Didion's work flourished.

Well done, Phoebe Philo and Céline—we weren't sure how you could get any cooler, but now we know.

12 Fashion Campaigns We Want to Live in

Gisele's a Surfer Girl in Chanel No. 5 Campaign